The I-5 is a critical pathway along the west coast for trade, tourism, and migration, and functions as part of the infrastructure bundle that parallels it - supporting symmetrical movements of water, oil, and gas.

Running along the San Joaquin Valley's west side, the I-5 is also vital for intermodal shipping, intensive ranching, farming and dairying, new housing development, waste dumping and the gas and oil industry.

And Interstate-5 is an "Intermodal Corridor of Economic Significance" - a category of freeway "corridors that are most essential to the California economy in terms of national and international trade," as defined by California Streets and Highways Code, Division 3, Chapter 4.7.

Experienced as a blur, few drivers realize the spare, majestic landscape along the I-5 corridor is polluted. Often, there is little to see, smell, or taste of the mostly invisible pollutants: benzene and perchlorate in the water, dioxin and PM2.5 in the air. For residents along the I-5 corridor, often these manifest as just a hazy sky, a faint odor, or the sense that something tastes different about the water.

The few sites that hint at the pollution - the Covanta Incinerator, a menacing black cube topped with smokestacks and surrounded by 30-foot-high perimeter fence, or the visual and olfactory shock of the high-density feedlot just north of Coalinga - stand out like exclamation points. But as much of the pollution is transient, many of the tour's sites are fugitive.

And the movement of traffic along the I-5 itself creates a river of moving air, where sprayed pesticides mix with diesel emissions, creating a moving stream dense with small particulate matter. 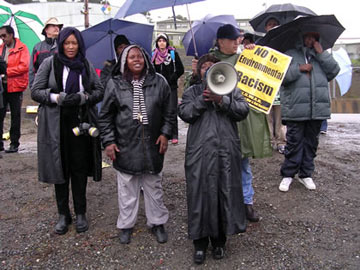 Invisible-5 tells the stories of communities tied together by the geopolitics of the I-5 corridor, and by their struggles for environmental justice along the route of California's major North-South highway.

The communities in the San Joaquin Valley along the I-5 are often hidden just out of sight of the freeway, where easy truck access moves toxic waste to landfills through small towns like Patterson, Kettleman City, or Buttonwillow. In the areas around San Francisco and Los Angeles, communities sit directly under or adjacent to the I-5, with homes, playgrounds, and schools just yards from the freeway.

Invisible-5 examines the historic reasons why polluting industries and businesses are often sited near poor, rural and inner-city communities of color in California, through the oral histories of people fighting for environmental justice along the I-5. 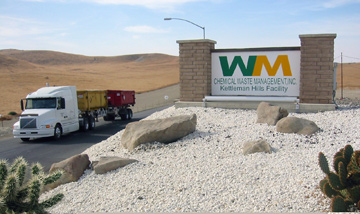 Kettleman City has two invisible sites - the underground site of one of the largest hazardous waste landfills in the west, and the former intended site of a giant hazardous waste incinerator that was never built. In 1993, plans for the incinerator were stopped by Kettleman City residents, who successfully organized against Chemical Waste Management, in a major environmental justice victory. 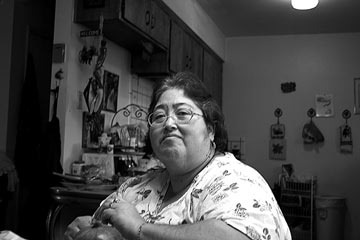 The story of the struggle for environmental justice in Kettleman City is told in the tour by Mary Lou Mares, a former resident of the predominantly Spanish-speaking, migrant-farmworker community. Her story, and those of other activists, historians, fenceline neighbors, farmers, and lawyers overlap through Invisible-5's twenty-plus sites.

Download either SOUTHBOUND or NORTHBOUND to get all the audio files.

LANDSAT maps, directions,
and all stop information from the website to accompany the audio on your drive.

About Invisible-5
Invisible-5 is a self-guided audio tour along California's I-5 corridor between SF and LA. more >

Resources
Learn more about toxic hazards and risks where you live. more >

About the collaborators
Invisible-5 is a collaboration between three artists and two organizations. more >

Visit these sites to find out more about organizations mentioned in Invisible-5:

Greenaction for Health and Environmental Justice
Working for environmental justice across the Western United States, and a collaborator on Invisible-5

Environmental Justice Coalition for Water
We enable community members to take control of their water resources by participating in water policy, planning and decisions.

Physicians for Social Responsibility - Los Angeles
Working for peace, health, and the environment.

Madres del Este de Los Angeles Mothers of East LA-Santa Isabel
The Madres work to promote the environmental, political, and educational awareness, advancement, and well-being of the Latino population within (but not limited to) the East Los Angeles community.

Communities for a Better Environment
Environmental Health and Justice for California's Urban Communities.